Types and Classes of Reflective Films

Reflective films are classified according to their reflective performance (reflectivity class) and the technology they are made with (type). There are three reflectivity classes (RA1, RA2, RA3) and three types of reflective films (A, B, C) that combine as follows: RA1/A, RA1/C, RA2/B, RA2/C and RA3/C.
The number indicates the retroreflective performance – 1 being the lowest and 3 being the highest, whereas the letter indicates the design or structure of the reflective film. There are basically two main technologies used to make reflective films: glass bead and microprismatic. In this article we are going to have a look at the differences between glass bead and microprismatic films and how the structure translates into the grade of reflectivity. 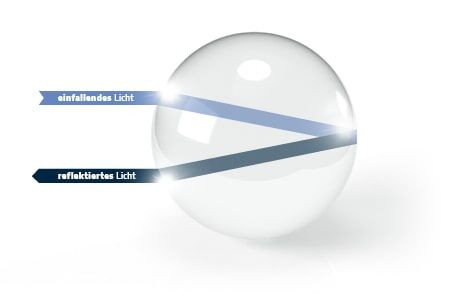 Reflective films made with glass beads are either Type A or Type B.

Generally speaking, this type of film uses the capability of microscopically small glass spheres to capture, bend and reflect light back to its source. The light enters the bead and gets reflected on the back of the bead. Due to the curved surface of the glass beads light particles are scattered. The higher light dispersion means that the reflection can be seen from closer distances but at greater angles.

Type A reflective films feature enclosed glass beads i.e., that the beads are completely surrounded by the flexible polymer top layer. This type of film has no visible pattern and is often used for graphic applications such as letters and numbers and in the form of reflective fabrics on safety gear. It is the most affordable and easiest reflective technology but also results in the lowest retroflection RA1 with a specific coefficient of retroreflection of min. 60 cd/lx/m2.

Type B reflective films feature encapsulated glass beads i.e., that the beads are surrounded by a structure of small cells that create an air layer between the beads and the polymer top layer so that the beads are able to reflect more brightly. The cell structure typically creates a pattern of small honeycombs or diamonds that is visible on the film. This type of film is often used for traffic signs or traffic control applications. The brighter reflection results in a higher reflectivity class RA2 with a specific coefficient of retroreflection of min. 180 cd/lx/m2.

Reflective films made with microprisms are Type C films. 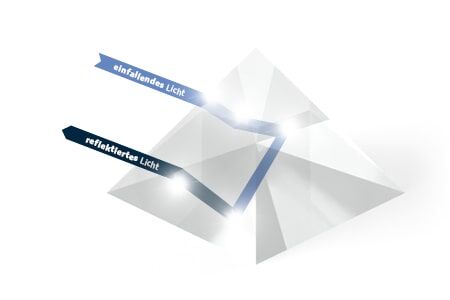 Microprismatic films contain a prism array out of clear or coloured polymer. The light enters and gets reflected three times inside the microscopically small prisms. Because of the hard-angle mirrors the light is more focused and can travel larger distances. Microprismatic films return about 80 % of the light to its source which is why they can reach up to reflectivity class RA3 with a specific coefficient of retroreflection of min. 300 cd/lx/m2. Nevertheless, there are microprismatic films classified as RA1 and RA2 as well. The fields of application vary from traffic signs and hazard plates to safety markings for vehicles and industrial purposes. There are two types of microprismatic films: metallised and non-metallised films.

Metallised films have a metallised layer underneath the prisms which enhances the reflectivity. The pattern on the film usually is to distinguish the different microprismatic films from another. Metallised prismatic films are the most expensive type of reflective film but they are also the brightest and toughest, great for bad weather conditions and dynamic environments.

In conclusion, it is to say that none of the different types of reflective films is better than the other but that all of them can be the perfect fit for an application. There are some factors to consider when choosing the right reflective film such as brightness, light dispersion, robustness, day and night-time visibility, colour, flexibility and cost-efficiency. We offer a wide range of different reflective films. Please do not hesitate to contact us so we can help you to find the right product for your application!